Soon TVs and water coolers will be full of terms like encroachment, backfield, and sacks and girls nights amp up. Yep, it’s almost football season. And that means, fantasy football is also starting up!

My husband loves football. Before I met him I watched a few Patriots’ games (hello, Tom Brady), but I didn’t have a college team and didn’t know many players.

So when Alabama had their first game of our relationship, I knew we were getting serious. I was invited and kissed when I brought a pizza. Soon, I realized he never ate during a game – even halftime. Though, the rules were laxer for NFL games.

After I took an interest in Alabama’s team and learning who Mark Ingram, Trent Richardson, and Julio Jones were, he mentioned fantasy football.

He got so much enjoyment out of it, and I loved that it was a competition. So I genuinely took an interest.

Would a slight football obsession be easy to write off? Totally, but I’m glad I didn’t. Now, Fall is a time that we always have something fun to talk about, text during the day, and goof off about.

That’s right girlfriends and wives – I actually love fantasy football, and it keeps our marriage fun. 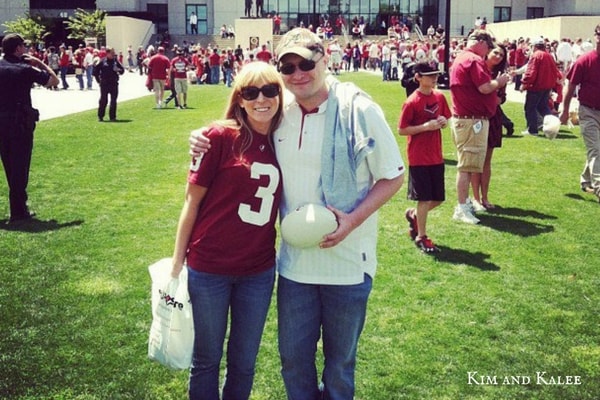 After a year of watching him draft his team, set his line up and ask me players names for any “gut feelings,” I decided I wanted in on the fantasy.

I joined our 12-person PPR (points per reception) league, and I actually made it to the championship game that year

But the coolest perk?

Our relationship grew too.

While we definitely don’t have all the same hobbies, football was one I personally connected with. I loved the player’s passion, the team’s uniforms and winning was obviously nice too!

So instead of fighting over the remote or wondering how can one man remember all of these players and teams but forget to pick up his underwear (not a problem of ours FYI), why not join the party and see if you like it.

Why it Helps Our Marriage

If you’ve read The 5 Love Languages, you know one of the languages is quality time.

That is definitely how I feel the most love and happiness. So joining in something that Jake and I can talk about for weeks is something I enjoy, and it allows us to get excited for the first Football Sunday in September.

I think there is something to be said about sharing a hobby too.

It shows respect to the other person. Like I see you spend a ton of time on this and are emotionally invested, it must be something pretty cool because you’re a cool person.

Finally, it’s a way to turn an emotionally-charged agitation for some couples into something they can do together.

Instead of anger, there is excitement in our house.

I also think it’s pretty cool to know something unexpected.

It takes some studying, but it’s not rocket science either.

I like fantasy football, and I know my stuff. BUT I don’t watch the RedZone football channel for hours every Sunday. Jake and I have separate rooms and TVs so that he can watch as much as he wants, and I can watch Legally Blonde after my lineup is set.

How Does Fantasy Football Work?

Points are earned based of if the player gets so many yards, catches, or touchdowns. You lose points if a player fumbles or your quarterback throws an interception.

If your husband is already part of a league, ask him if there is room for a new player. A lot of the time leagues can expand from a 6 or 10 person league to a 12-person league. We’ve always had at least one person quit each year in our league too. So chances are there is room…if you’re willing to commit to playing.

The whole fantasy season is about 13 weeks long, and it has playoffs and a “Super Bowl” just like the real games. Ours usually ends in December around Christmas and has a cash pot for the winner and runner-up.

Here’s the catch – you have to go and set your lineup each week.

Jake and I have bonded over an annoyance of people not setting their team for the week, but you definitely don’t want to be the one doing the annoying.

Players get hurt or have a bye week – so each week you have to check and make sure your starting team is ready to go.

If you want to win, you may also have to research the players and do your studying. Which leads us to my favorite tools below.

Each year before our draft, fantasy football magazines come out. They tell you who the best players are and list them in order from the best player to the worst, and it sorts them into positions (so no sweat if you don’t know if Doug Martin is a running back or a tight end).

Then you can also print off a cheat sheet to track who is being picked each round when you go to draft. This is VERY helpful! Only 1 person can have each player, and no one likes it if you ask for Aaron Rodgers 3 rounds after someone has him.

Get Your Cheat Sheet

Lastly, there is a fantasy football show on the NFL network that comes on each week. This is optional but helpful. It will tell you who is hurt, who you should pick up, and who to play or sit each week.

Still unsure? They actually have a Fantasy Football for Dummies book too.

Amongst the studying, there are the fun fantasy football team names. The first year my name was, “Suck my Peterson” (Peterson was a player I had). Other favorites have been “Steady Brees” (Drew Brees was my quarterback) and Jake’s Brady Bunch.

There are all kinds of fun names for your team!

Do you and your husband play fantasy football together?

Would you ever try it?

You may also like our 74 words of affirmation for your spouse!

BEACHBODY
TIPS
RECIPES
MEAL PLANS
WORKOUTS
DIET
MINDSET
REVIEWS
We use cookies to ensure that we give you the best experience on our website. Click okay to accept.OkRead more